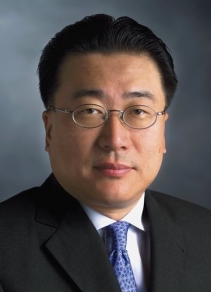 Cho is the youngest of four sons of Cho Choong-hoon, founder of Hanjin Group. The four brothers each inherited an airline, heavy industry, shipping, and finance, and he has been mired in a bitter feud over the inheritance with two older brothers for a decade since 2002.
After spending several years at Korean Airlines in Europe, he earned an MBA from the International Institute for Management Development in Switzerland and returned home in 1989 as a director at Hanjin Investment & Securities, the finance division of the group.
Now named Meritz, the financial group has estimated assets of over 36 trillion won as of the first quarter in 2016.
He married Koo Myeong-jin, second daughter of Ourhome Group chairman Koo Ja-hak (third son of LG Group founder Koo In-hwoi) and Samsung founder Lee Byung-chull’s daughter Lee Sook-hee, in 1987.