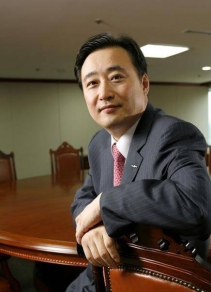 Kim was born in 1963 in Gangjin, South Jeolla Province, as the eldest son of Kim Jae-chul, founder and chairman of Dongwon Group.
He graduated from Korea University and joined the group in 1987 as a rank and file. He went to Tokyo to earn an MBA at Keio University and returned in 1991 to venture into finance as a junior staff at Dongwon Securities where he became the president in 2004, merging the firm with Korea Investment & Securities the following year.
He is widely credited for leading the finance divisions of Dongwon Group, to the top of the securities industry. He devoted himself to securities and investment for almost two decades, and with Mirae Asset’s Park Hyeon-joo, is said to be the major leader of the industry. Kim and Park both majored in business at Korea University and spent 10 years at Dongwon Securities.
Dongwon was founded by his father, who was a captain of a deep sea fishing boat, and was the first to introduce canned tuna. It grew into a conglomerate with more than 20 affiliates with 9 trillion won annual sales in total.
Following the founder’s belief, Kim started from the bottom of the corporate ladder. He even spent six months on a deep sea fishing boat himself after graduating from college.
Brother Nam-jung is in charge of the food divisions of the group.
He married Ko So-hee, daughter of former Construction and Transportation Minister Ko Byeong-woo, in 1992. He has a son and a daughter.