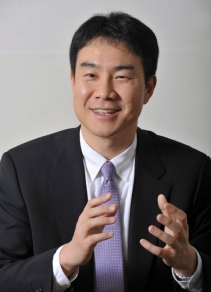 Koo Bon-hak is Cuckoo Electronics’ CEO and has been leading the county’s No. 1 rice cooker producer since 2006. Born in 1969, he achieved his bachelor’s degree in business administration at Korea University. After graduating from University of Illinois with master’s degree in accounting, he worked for a U.S. company as an accountant.
Koo joined a research institute of Cuckoo Electronics in 1996, and 10 years later became the CEO. He is the company’s largest shareholder owning 33.1 percent of all stocks.
Cuckoo is named after the CEO’s last name. Bon-hak’s father Koo Ja-shin has launched the cooker production in 1978. Cuckoo Electronics went public in 2014, since when Koo Bon-hak has continuously grown the company’s market capitalization.