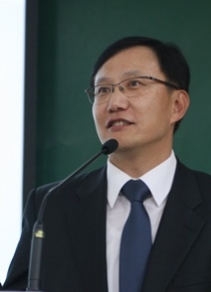 Jung was born in 1962. He studied microbiology at Seoul National University and earned his Ph.D. in molecular biology at KAIST. He was a professor at Sun Moon University when he lost government funding for his study on botulinum toxin due to the foreign exchange crisis.
Jung ventured into the biotechnology industry and founded Medytox, a R&D firm devoted to the deadly toxin used to manufacture Botox, a prescription medicine commonly known to improve – albeit temporarily -- the appearance of wrinkles.
After six years of R&D, he succeeded in manufacturing Medytox, a less expensive version of Botox. It was rejected as a generic at first, but slowly gained a reputation of its own.
In 2012, Allergan, a global leader in the industry and the creator of Botox, signed an estimated 390-billion-won-worth contract with Medytox for its new product in liquid form. Medytox is a dominant player in the domestic market as well, up to 40 percent in market share. It posted a total sale of 88.5 billion won in 2015.