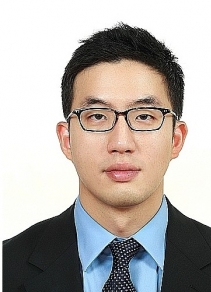 Koo Kwang-mo is an adopted son of LG Group chairman Koo Bon-moo. He was born in 1978 in Seoul. He studied engineering at University of Rochester of the United States, and got his master’s degree in business administration from Stanford University.
In 2006, he joined LG Group as a deputy manager in the finance department. He moved up the ladder by being promoted to deputy department head in 2011 and named LG Group’s home entertainment business head of the U.S. New Jersey division. He was promoted again in 2014 as a director of the group’s synergy team.
Koo Kwang-mo’s father is Koo Bon-neung, a younger brother of the group chairman Koo Bon-moo. After the chairman’s son Won-mo died in an accident from an unknown cause, Kwang-mo entered the chairman’s family register as a foster son. Kang-mo’s great-grandfather is LG Group founder Koo In-hwoi.
LG Group explained that Koo Kwang-mo’s register had gone with the group’s Confucius family tradition whereas industry watchers expressed doubt by saying that it was aimed at corporate succession among the family members.