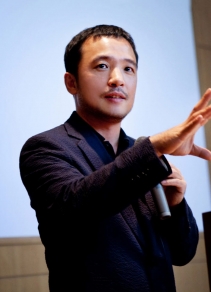 Kim was born in 1967 in Seoul. He majored in computer science at Seoul National University and carried on with his studies before dropping out of a doctorate course in 1997 to focus on the venture NCSoft.
While an undergraduate, Kim already was recognized as a promising programmer, creating a series of notable software such as Arae-a Hangeul (with Hancom founder Lee Chan-jin) and Hanmetajakyosa.
He headed the development of AmiNet (now Shinbiro), the first online internet service in the country, at Hyundai Electronics, before striking out on his own in 1997.
With his former colleagues Kim established NCSoft and the next year jumped to the top as an online game developer with Lineage, an online role-playing game that has dominated the gaming industry with Blizzard’s StarCraft.
The flagship product still remains popular posting over 300 billion won ($253 million) in annual sales, while NCSoft continues to launch successful spin-offs and games such as Lineage 2 and Guild War, firmly positioning itself as the top game developer.
Kim also is the club owner of NC Dinos since 2011, projecting his childhood dream of becoming a baseball player.
Kim married Yoon Song-yee, another science prodigy with a Ph.D. in artificial intelligence from MIT, in 2007 and has a son. It was his second marriage. Yoon has been managing NCSoft, and before joining her husband’s company, was the youngest-ever executive of SK Telecom at the age of 28.
Her involvement in management, and her promotion to president of the company, has been said to be the reasons for the disagreement and the subsequent falling-out between Kim Taek jin and Kim Jung-ju of Nexon, the biggest shareholder of NCSoft. Nexon sold all of its stocks in 2015 and ended the feud.