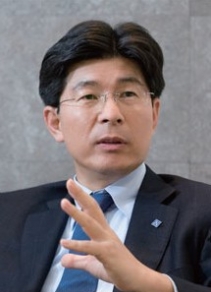 Kim was born in 1962 in Sangju, North Gyeongsang Province.
He studied electronics at Kyungpook National University and was a researcher at LG Electronics before he set up mobile parts manufacturer KH Vatec in 1992. He sold his shares in his IT company and used the money to take over Seoul Electronics & Telecom in 2003, when it was under court receivership.
He later became the largest shareholder of NICE Group, which specializes in finance and credit information services in 2005. Under Kim, NICE has grown into the largest finance infrastructure company, and posted 1.6 trillion won in annual sales in 2015.
In addition to providing consumer and enterprise credit evaluations, the group is expanding into a diverse range of businesses from FinTech to next generation materials.