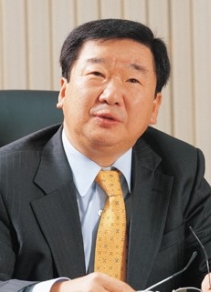 Koo Bon-neung is the son of late LG’s honorary president Koo Ja-kyung and grandson to LG (formerly Lucky Goldstar) founder Koo In-hoi. He was born March 26, 1949 in Busan. In 1976, he graduated from Korea University with a bachelor’s degree in business.
In 1976, Koo joined Lucky Goldstar as manager of the company’s branch in Chicago. He later moved to Heesung Metal Ltd. and rose to vice-president of the company. Since 1996, he has become president of Heesung. Koo has also been president of the Korea Baseball Organization, the governing body of professional baseball in Korea, since 2011.
Koo has received stellar reviews for his performance as president of the KBO. He was a baseball player himself in middle school and is a member of the Korea Baseball Association, which governs amateur baseball and the national team.
His first wife, Kang Young-hye passed away in 1996; they have a son and a daughter together. His son, Koo Kwang-mo was officially adopted into Koo Bon-neung’s brother, Koo Bon-moo’s family in 2004.
In 1998, he married Cha Kyung-sook, his current wife.
In 2014, he ignited controversy by issuing 1.1 percent of LG Group’s stock to his son, Koo Kwang-mo.