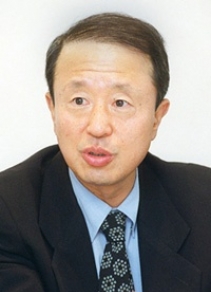 Hong was born in as the eldest son of Namyang Dairy Products founder Hong Du-yeoung.
He graduated from Yonsei University with a business major and joined his father in running the leading milk processing company in 1977.
In 2014, Hong received public attention when charges of tax evasion and owning stocks under borrowed names were brought against him, but in 2016 he was found not guilty of most charges and only received a fine of 2 billion won.
He has two sisters and two brothers: Woo-sik is CEO of Seoul Communications and Myeong-sik runs a number of restaurants including upscale Italian franchise Il Cipriani. His mother Ji Song-juk, aged 87 (as of 2016), still keeps an eye on the management of the company since 1986 as a non-executive director.
He married Lee Un-kyeong, daughter of Korea Marine Transport founder Lee Hak cheol, in 1976 and has two sons, and both are working at the company.