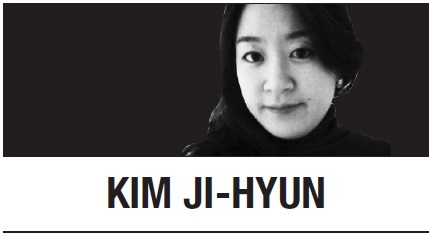 When President Trump recently tweeted that he has a big “nuclear button” that he can and will use, it was one of the most ridiculous things I had heard from a president.

Well, one of the most, since ex-President Park Geun-hye said she “didn’t know” that she was getting in trouble when she let her friend Choi Soon-sil run the country.

In addition to who spoke the words -- the president of the world’s most powerful country with corresponding responsibilities -- the choice of vocabulary had a great impact on everyone involved.

Recently, he indicated that recent high-level talks between the two Koreas were his doing. Good for him. Just that for everyone watching the events unfold, it wasn’t exactly pleasant.

What Trump said made South Koreans feel once again that South Korea was on the sidelines while Washington and Pyongyang were running the show.

It also couldn’t have been a happy moment for North Korea’s Kim Jong-un who is trying to weigh strategies -- although Trump’s recognition could have made him feel that he finally has the US president’s attention.

Last month, Samsung heir apparent Lee Jae-yong said in his final testimony at his appeals trial that he would take full responsibility for whatever has happened with his company, and that he would always be indebted to the country for the privileges he enjoyed by being born into the Samsung family.

Perhaps Lee didn’t really mean any of this and wants to make a quick exit. Regardless, public sentiment did soften a bit, and critics were pointing their fingers more at the former president, saying that she was making Lee a scapegoat.

We don’t know if the courts will be affected, but at least in terms of the public, Lee’s language seemed to have worked.

That’s the power of speech. Words have an impact on people and lives in ways that are often immediately not perceivable, but can be ultimately lasting. We all know this, from celebrities to global leaders, but it’s still hard for even the most gracious to speak in ways that can move people.

The challenge becomes even bigger for political leaders, who have to think about both their factions and voters. Internally, they are up against some of the fiercest fighters, while on the outside, they must put on a mask to woo voters. The same applies to leaders of corporations, where the image of both the management and the company itself matter for sales.

And in Korea, language becomes yet another barrier.

The different levels of formality you must use when addressing people of different ages are one of the biggest drawbacks of Korean culture.

Having to use completely different types of words to convey respect makes it difficult for people to become more open and accept differences.

This is all the more reason why speaking with grace and choosing your words wisely is one of the most challenging tasks in Korea, and not just in the corporate world, but with family members, friends and even acquaintances.

There is a very old Korean saying that, in verbatim, goes like this: “one word is enough to pay back a debt.” Unfortunately, it seems like people remember this only after they fail to communicate, and end up losing family, friends, votes and even entire companies.

Every word counts, and every nuance matters. You can’t say you once wanted to rape someone and take back those words, or say it was something you did when you were young and stupid.

You can’t tell people to let your friend run your company, to say you put “every trust in her,” and then expect to be forgiven with just a simple sorry. You can’t say you boasted about having a button for nuclear weapons, and then say you didn’t really mean it.

You can repent, and you can regret, but in the end, the consequences must be paid for, one way or another.

And this goes especially for politicians and corporate leaders whose words have repercussions that go far beyond the words of an average citizen.

The writer is the managing editor of The Investor.