It might be too early to declare that the electric vehicle battery sector, especially lithium-ion, is South Korea’s new growth engine -- on par with semiconductors that propelled the economy forward -- but analysts here are highly optimistic.

In 2018, the top three EV battery manufacturers -- LG Chem, Samsung SDI and SK Innovation -- secured orders worth 110 trillion won ($96 billion) from global automakers. They are expected to bag even more new contracts this year, according to local analysts. 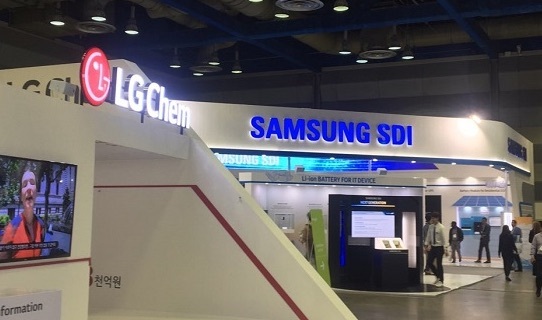 “It is one of the few industries rising at double-digit growth rates, so battery makers are upbeat this year,” Park Jae-bum, senior researcher at Posco Research Institute told The Investor. “In that sense, the battery industry is very close to being like the semiconductor sector whose exports amount to 140 trillion won a year.”

Park and other analysts attributed the growth to better-than-expected EV sales amid tightened environmental regulations in Europe and China. Their prediction is that the upward trend will continue for the next several years.

This year, manufacturers are expected to sell 4 million units, which is double that of last year. The battery market will grow rapidly along with the EV market, which is expected to increase to 22 million by 2025, taking up 21 percent of the automobile market.

Backed by the EV boom, LG Chem’s battery business turned around for the first time in the fourth quarter last year since it entered the sector in 2000, becoming the first Korean firm to post a profit in this business.


Last year, China’s CATL and BYD together occupied 34.9 percent of the market, while Japan’s Panasonic took up 21.9 percent. Meanwhile, LG Chem had a 10.2 percent market share, while Samsung SDI took up 5.5 percent, according to battery market research firm SNE Research.

These five companies are expected to continue dominating the EV battery market, with their combined market share remaining upward of 70 percent by 2025, according to Switzerland’s UBS Group analyst Colin Langan. In 2017, their combined stake stood at 56.1 percent, rising to 73.4 percent in 2018.

“Overseas automakers are not using Chinese products and most Chinese companies except CATL are heavily relying on their domestic markets. It would take some time for Chinese firms to earn the trust of automakers who are working with LG Chem and Samsung,” Posri’s Park said.

At the same time, the Chinese government is reducing subsidies for EVs and will scrap them as early as next year. This is stirring upChina’s battery industry, forcing smaller and uncompetitive firms to close down. This also means Korean and other overseas companies would have a chance to grab higher market share.

The Korean battery makers recently announced massive investment plans that would help raise the entry barrier for many latecomers.

SK Innovation has announced a series of aggressive investment plans worth 3 trillion won to build facilities in Hungary, China and the US. It plans to expand its annual production capacity to 60 GWh by 2022 with an ambitious plan to become the No. 3 battery maker by 2025.

“It might take some time for Chinese companies to catch up with the technology levels of Japanese or Korean firms,” Pak Chan-gil, a researcher at SNE said. “There are a lot of plans by European companies such as Northvolt and Dyson which have announced a foray into the EV market, but most of them are not even close to real production and it might take several years.”

However, issues such as raw material prices and the fact that the US and Europe are not happy that the market is cornered by Asian countries, need to be taken into account, he added.

In February French President Emmanuel Macron said he “cannot be happy with a situation where 100 percent of the batteries for electric vehicles are produced in Asia,” while announcing a five-year plan to put 700 million euros ($790 million) to boost the European EV battery industry. His remarks were followed by an announcement from Germany that it has set aside 1 billion euros to support battery cell production.