[Chew on IT] Resemblance widely accepted in tech world 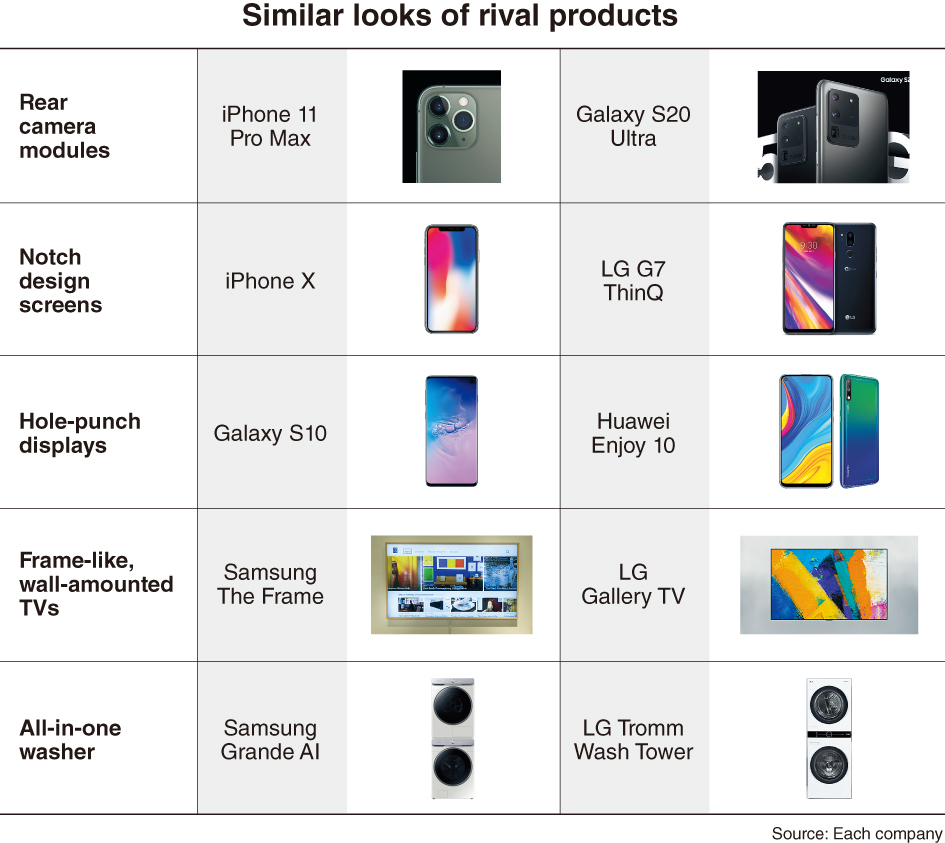 When Apple released its iPhone 11 Pro Max last year, it was teased for having an induction cooktop-design camera module on the rear.

But in a few months, its archrival Samsung Electronics came up with the Galaxy S20 Ultra, boasting a similar cooktop-like rear camera that offered a 108-megapixel lens and calling it the industry’s first.

“It is difficult to buck the trend,” said a Samsung official at the time in response to a question about why the company risked criticism for “copying” Apple’s camera design.

“As smartphone users want more lifelike picture quality, it is natural that the camera module gets bigger to embrace more lenses and sensors,” the official explained.

Then, earlier this month, Samsung came up with an even bigger camera sticking out from the sleek Galaxy Note 20 Ultra edition.

Ever since the fierce battle between Apple and Samsung over smartphone design patents -- which entailed a lawsuit filed in 2011 and resolved in 2018 -- imitation has been widely embraced as an open secret of tech innovation.

Samsung is not the sole imitator in the highly competitive mobile world.

Apple, whose late founder Steve Jobs once mocked Samsung’s phablet phone Galaxy Note and its stylus, introduced the Apple Pencil for iPad. And as the screens on Samsung phones got larger and more bezel-less, Apple gradually enlarged its device screens.

It is now going after Samsung in the 5G smartphone market this year, and probably in the foldable device market in the near future.

Resemblance among rival products occurs not only between Samsung and Apple.

LG Electronics, which once opted for a notch design for its smartphone display that looked almost identical to that of the iPhone X, has changed the design of the front-facing camera area to a so-called “water drop” notch that appears a lot more like Samsung’s Infinity O hole-punch display.

The hole-punch display was first adopted by Samsung in 2019 for its Galaxy S10 series, which featured the least bezel space and the smallest front camera space on the main display. It was copycatted by China’s Huawei Technologies for its Enjoy 10 phone later that year.

“The technology levels to make smartphones have reached a peak, and it has become very difficult to bring landmark innovation with groundbreaking changes,” said an industry insider.

“The rival companies are learning from each other and becoming more similar, and it’s the way of surviving in the tech world these days. The word ‘copycat’ is a thing of the past.”

It’s not only the smartphone makers but also other electronics manufacturers that embrace imitation on the pretext of providing what consumers want.

Because for most home appliances, like TVs, refrigerators and washing machines, it is hard to make drastic changes to the external design, it’s more difficult not to take cue from a rival’s product.

In the TV market, the main point of competition has long been about who can make TVs as thin as possible while offering lifelike picture quality.

To highlight the thinness of their latest TVs, both Samsung and LG have introduced framelike or wall-mounted TVs that are cordless without any ancillary items.

First developed by Japan’s Sharp in 1991, the wall-mounted type has become mainstream, followed by today’s largest TV makers like Samsung and LG.

LG, then, further improved its wall-mounting technologies to narrow the gap between the TV and wall as much as possible, from 4.6 centimeters to 2.5 centimeters in 2008.

Its organic light-emitting diode TV technology has enabled the company to become a peerless leader in the wall-mounted TV market today by introducing the Wallpaper in 2017. Less than 4-millimeter thick, it lies flush against the wall like a piece of paper.

Samsung has followed the thin TV trend by launching similar competitors like The Frame and many other wall-mount models featuring its quantum-dot light-emitting diode displays, or QLED TVs, including the latest The Wall.

“The trends are clear: TVs should be thin and anywhere,” said a market observer. “If the trend continues, Samsung would naturally switch from LCD to real quantum dot that is a kind of OLED in the future.”

“By that time, LG would tease Samsung for following its lead,” he added.

Even for washing machines, a less competitive category of home appliance in terms of design, products resemble one another as manufacturers have started to apply new technologies to their washing systems like artificial intelligence programs.

The all-in-one Samsung Grande AI launched early this year took the market by surprise by introducing the first washer tower that integrates a front-loading washer with a dryer on top of it, and enables control of the dryer with a single button on the washer.

In a few months, LG introduced Tromm Wash Tower, featuring the similar integration of a washer and dryer.