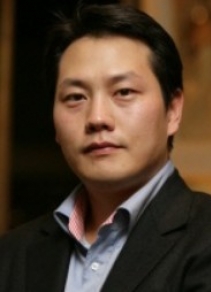 Kim Won-il is the former president and main shareholder of Golfzon Co., screen golf company. Born in 1975, Kim graduated Korea University with a bachelor’s degree in environmental science.
Kim launched Golfzon Co. with his father Kim Won-il, who worked at Samsung Electronics until 1993, in 2000. Golfzon boasted a 76 percent market share in the South Korean screen golf industry as of 2014.
He was the chief strategy officer (CSO) of Golfzon from 2008 until his promotion to joint chairman alongside his father in 2010. He eventually resigned from his role as chairman, but remained a shareholder. In 2005, he married Oh Ji-young.
Kim established a limited-liability company in 2013, called Won and Partners.
In 2014, he purchased a 17-story building in Gangnam, Seoul, worth 36.3 billion won, which was previously used as the headquarters of South Korean cafe franchise Caffe Bene.