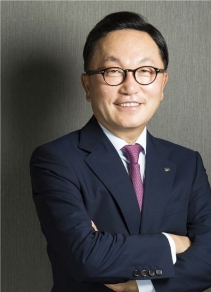 Park was born in Gwangju in 1958. He went to Gwangju Jeil High School and graduated Korea University with a business major. He set up an investment consulting firm before joining Tong Yang Securities (currently Yuanta Securities Korea) in 1986.
On a fast track to the top, he made the head of branch at Dongwon Securities (currently Korea Investment & Securities) at the age of 32, then the youngest in history.
With close colleagues, he established Mirae Asset Capital, Mirae Asset Global Investments in 1997, and Mirae Asset Securities (now Mirae Asset Daewoo) in 1999 and became the most successful finance manager in Asia, with 60 trillion won of assets under management. Since 2001, he has been overseeing as chairman of Mirae Asset Finance Group, an umbrella group of 23 firms covering securities, asset management, insurance and capital as of 2015.
He is credited with having  pioneered and changed the culture of securities investment in Korea: introducing close-ended mutual funds in 1998, venturing into BRICs and China, and encouraging investors to take a long-term perspectives.
He became the first to establish an overseas branch, Mirae Asset Global Investments in Hong Kong. It operates in 14 countries, as of 2016.
He is also active in real estate investment in and out of the country, purchasing buildings in prime locations in major cities including Washington D.C., Chicago, Shanghai and of course, Seoul.
He also branched out into the hotel business, purchasing Four Seasons Hotel in Sydney for 340 million in 2013 and opening Four Seasons Hotel in downtown Seoul, the first in Korea, in 2015.
He acquired leading securities firm KDB Daewoo Securities in 2016 and is still fine-tuning the merger.
He married Kim Mi-kyeong and has three children. The elder daughter graduated from Cornell University and worked at McKinsey Korea and CBRE before joining the company’s Hong Kong branch. Park denies any plan to hand over the firm.