Samsung No. 2 in global R&D spending

[THE INVESTOR] Four South Korean companies ranked in the top 100 research and development investment in the fiscal year 2015/16, a European Commission report showed on Dec. 27.

The 2016 European Union Industrial R&D Investment Scoreboard, published by the European Commission, analyzed 2,500 companies that have invested the largest sums in research and development. The report includes 75 South Korean firms, with four conglomerates making it into the top 100 list. 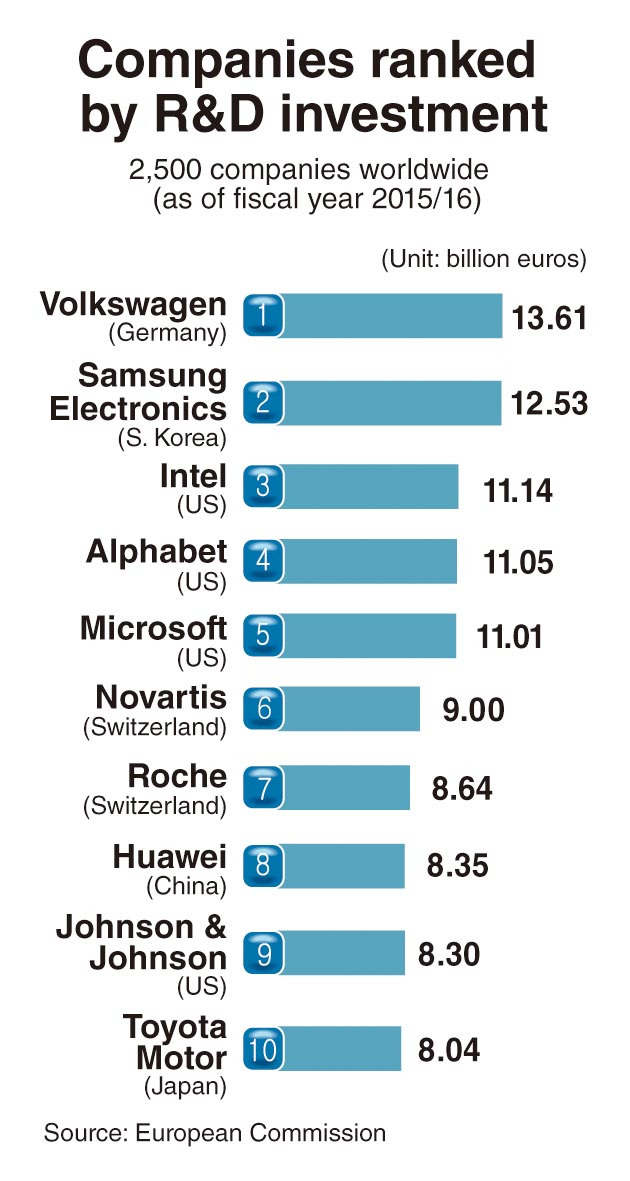 Samsung Electronics came in at No. 2 with a total investment of 12.5 billion euros ($13.0 billion), following Germany’s Volkswagen AG with 13.6 billion euros. The two companies maintained their respective positions for three consecutive years.

LG Electronics entered the top 50 this year at No. 48 with 2.7 billion euros in R&D investment. Hyundai Motor was ranked 84 and chipmaker SK Hynix Inc. at 85.

The report found that this year’s R&D saw a significant rise, driven by high-tech industries.

The R&D investment by the 2,500 firms included in the list totaled 696 billion euros in the 2015/16 fiscal year, an increase of 6.6 percent from the previous year. R&D growth was driven by companies operating in industries of information, communication and technology, health and auto, the report said.

The US led the ranking in terms of both the total value and the number of companies. A total of 837 companies based in the US invested a combined 268.6 billion euros, taking up 38.6 percent of the total R&D investment. The EU followed with 590 firms, Japan with 356 firms and China with 327 firms.

China’s R&D investment jumped 24.7 percent from a year ago, boosting its share to 7.2 percent, 1.3 percentage points higher compared to a year ago.

The EU and Japan occupied 27.0 percent and 14.4 percent, respectively.